Since it was Shabatt, in Jerusalem all the shops on the main streets were closed and there was no sign of anyone.
In The Holy City, Jerusalem, it appeared that Shabatt is observed more strictly than throughout the rest of the country.
The hotel where Marre and Kumiko stayed is located in the ultra-Orthodox Jewish region of Jerusalem. Therefore, they were able to closely observe the change in the people's daily activities due to Shabatt, which was a real learning experience.

The nation of Israel is not only devoted to preserving their ancient traditions handed down from generation to generation, but they also are devoted to modern day advancements which can be especially be seen in the Israeli Air Force, which is universally recognized to be one of the world's most elite. 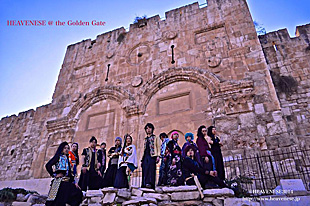 In the afternoon of Shabbat, we did a photo shoot in the front of the wailing wall in the old part of Jerusalem. At the Golden Gate, our supporters from Japan joined us.
Before the photo shoot, the president of HEAVENESE' support group, Mr. Tsutsumi, conducted a Oh-harai ceremony (wave offering) to purify the site. This was the main reason he came to Jerusalem. Since Oh-harai is a traditional Shinto ceremony, that makes it very Japanese. However, the fact is that this purification ceremony is the same as the one done by ancient Jewish priests.
Psalm 51:7 says, "Purge me with hyssop, and I shall be clean; Wash me, and I shall be whiter than snow."
Just as this verse says, the ancient Jewish priests waved branches of hyssop, which was their purification ceremony.
It was very biblical and also "Japanese" that the purification ceremony was conducted at the Golden Gate according to ancient Jewish customs. 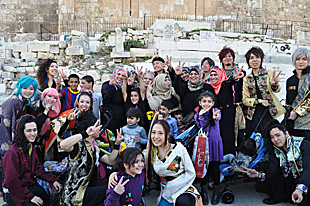 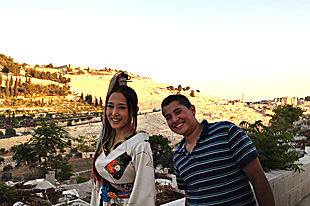 While doing the photo shoot, the local people (Arab children and adults) watched us intently. There were some mothers with children and some boys who were very friendly and engaged us in conversation and asked to take pictures with us, so we did.

The Golden Gate is located on the east side of the Temple Mount in Jerusalem.
According to the well known account from the Bible, this is the gate through which Jesus entered as the multitudes welcomed him enthusiastically as their Messiah. However, when Jerusalem was under the rule of the Ottoman Empire, the Muslims sealed off this gate in order to bar the Messiah from entering.
This gate is still closed because this region is in the Arab neighborhood. Both Muslims and Christians believe that the Messiah is the only one who can open this gate, and then there will truly be peace on earth. The Holy City, Jerusalem, is a place where the world of the Bible continues to live on.

After our picture taking at the Golden Gate, we sang Silk Road as a prayer for peace. Then we headed to the Gate of Herod. 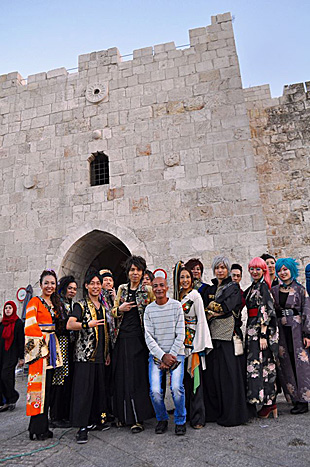 A 16 petal chrysanthemum crest is inscribed on this gate.
Ben-Ami Shillony, a professor at Hebrew University, is one of the preeminent authorities on Japanology. Later on, Marre asked him directly, "Why do you think the crest on the Gate of Herod is just like the Japanese imperial crest?" Mr. Shillony answered, "They are most likely connected." Doesn't there seem to be a real connection between Japan and Israel?

Beyond the Gate of Herod was a lively Arab neighborhood which was so full of energy that it felt like it would burst.
With that day being Shabatt (the Sabbath), we saw the distinct difference between this Arab area and the deserted Jewish neighborhood. Since the Arab neighborhood is normally lively, it can be seen how if something occurs there, it can quickly turn into frantic turmoil as we often see on TV. With all that said, the Arabs were very cheerful and spirited, and as we were taking pictures there, they surrounded us eagerly wanting to be in the pictures. We put a lid on our desire to spend more time with those friendly Arabs, and we all started heading to the venue for Japan Week. The final day of Japan Week was upon us which we would be closing it out as the headlining band. 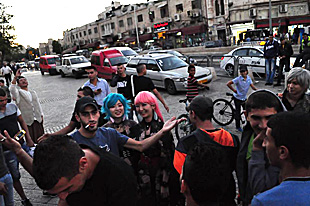 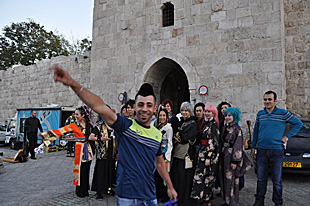