Overwhelming Experience of our First Performance at School!
The school gym was filled with excitement! 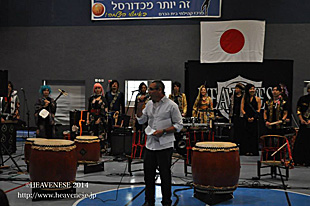 The door for us to perform at a local school while we were in Israel was opened by the City Hall of Jerusalem.

It always gives us a great joy whenever we get to perform for children, whether in Japan, the U.S., or any other places. When we first started performing as Heavenese, we never expected children to become such big fans, but seeing a lot of kids passionately dancing and singing along with us while we perform on stage, we realized how Heavenese is liked by children as well as adults.

In the U.S., we got to perform at a school in Harlem in N.Y. for black children, and we an never forget the excitement they expressed toward our show that day. So it was our strong hope that we would be able to
perform for children in Israel, and we had been asking the city of Jerusalem via Japan Embassy for the possibility.

The day we visited the school, Ziv-Sieff and Marks School, which is located in the western area of Jerusalem, was very hot, unlikely for
the end of October. It reminded us a lot of summer in California. The show started at 11 am. The principal and some other teachers had seen our short performance of taiko-drums at a reception ceremony on the 20th. They told us how they were deeply touched by the performance, and when our staff  visited the school 2 days prior to the show, they even shed tears, hearing Heavenese's vision of bringing the message of Japanese spirit and harmony. They told the staff that "there was nothing we could not speak, no taboo subjects. Speak whatever you want to communicate with the children." Receiving such encouragement beforehand, we could not be anything but excited to perform for the school! 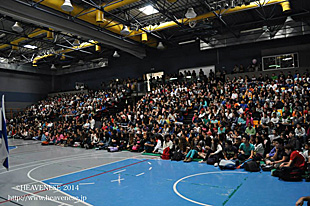 On the day of the show, with some traffic problems, Marre and Kumiko had to arrive late, but the students were eagerly waiting for us. Even before the show was starting, the gym was filled with cheers of the already-excited kids! The show started with a narration as it always does, but we bet nobody could hear a word of it in that gym!

Following the band members, the vocals appeared on stage, and the excitement of the room was at a peak at this moment. We did a special set-list for Israel, which started with Japanese festive cheers of "La-se-ra!" and the song "You Are Good."

As usual, we asked the kids "Do-yo?!(How is it?)" and they responded with a great "Ii-yo!!(Great!)" The shamisen duo and taiko duo followed. The kids, ranging from elementary school to high school students, cheered and shouted in joy, and the principal was enjoying the show very much too. He also seemed really pleased with how his students were having a great time.
Marre spoke about how the Israeli Army supported Japan after the devastating earthquake and tsunami in 2011, and gave thanks on behalf of Japanese people, the students responded with enthusiastic applause and cheers. 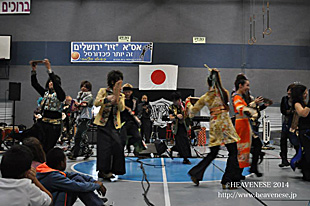 Also, though it wasn't in our first plan, we decided we should do our usual routine of doing a short "terakoya" (Japanese traditional school) comedy show in between the songs since the audience was mainly kids. Coming up with an impromptu script just before the show started, we hardly had any rehearsal. It was a simple skit where the band members did Japanese abacus' percussion, and then Koike, the saxophonist went around in a circle and fell in the end as we sang an Israeli fork song. It didn't quite go as we had planned and it was quite foolish too, but thankfully, the kids and the teachers laughed hard. Laughter is surely a common thing all over the would!

Heavnese peformed LIFT, and Marre shared a story miraculous taiko
awaiting for us in Haifa, and ended the show with 3N1.

Then Heavenese's speaker Marre's important message time. He told the students how the students at the school are sending out a great message to the world by living in harmony with each other, despite their different beliefs: Jewish, Islam, and Christian. We could hear students applauding at pivotal points. 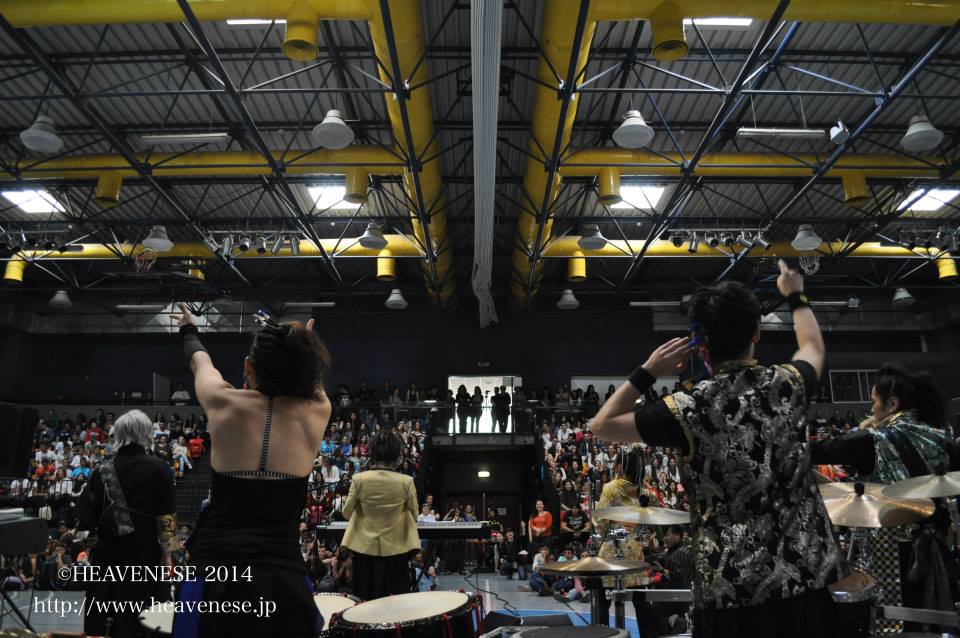 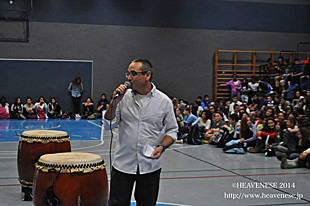 When the show was over, the principal spoke to the students in Hebrewfor a while. He seemed to be explaining what Marre said for those who did not understand English. Then a student, whose mother is Japanese, came forward to give a gift and a thank-you letter to Heavenese. 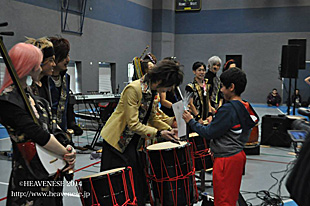 Then, a surprising thing happened. As the principal finished his speech, the students started rushing toward Heavenese. It was unexpected and we thought the hildren might want to leave the place as quickly as possible because the entrance was behind Heavenese...but it turned out that those children were rushing toward the band members to ask for autographs and photos! The kids wanted to be with Heavenese so much that they ran toward them the moment the show was over. We were so touched with their hearts so pure and innocent. 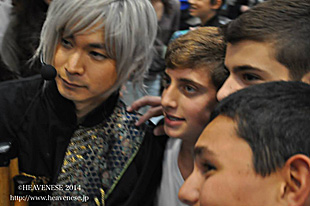 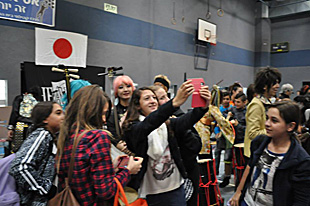 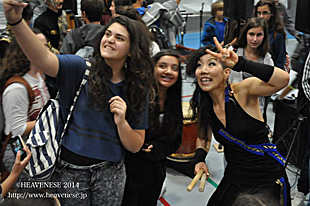 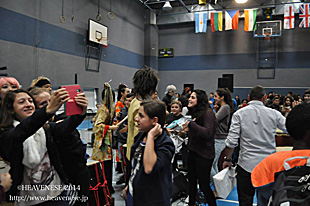 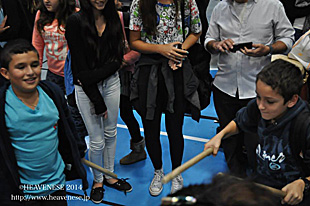 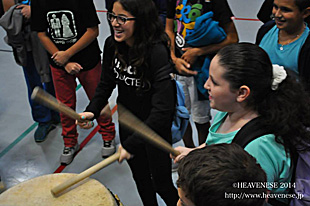 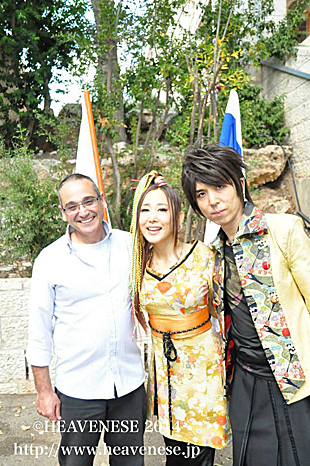 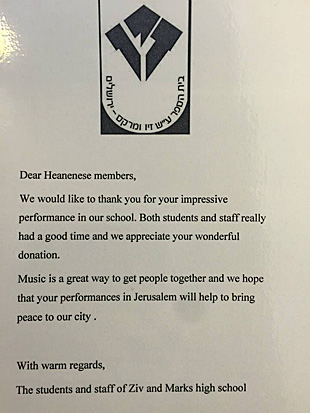 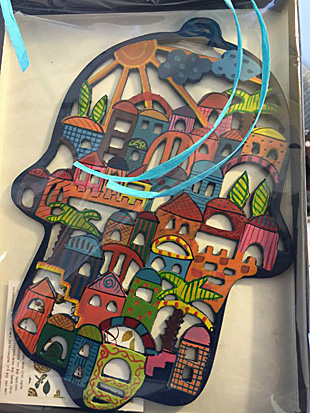 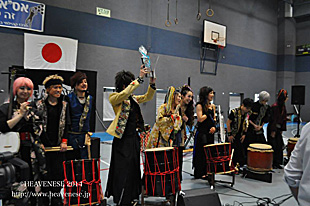 The lunch provided by the City of Jerusalem and prepared by the school for us was "the" Israeli soul food, Falafels. The principal himself chose the restaurant he thought was "the best" in the area to prepare them for us. We were so thankful for their warm hospitality.

After eating lunch, we had to hurry to the next private school called Ankori. It is a small school with only one classroom in a building.
Since the place was too small for all the band members to perform, we performed outdoors at an open space in front of the building. So our show ended up being a street-performance for everyone walking down the street as well. Though the performance itself was only for a short time, many stopped by and listened. As Marre spoke about Heavnese's purpose of bringing the message of peace and harmony from Japan, a lot of people came up after the show to him to tell how they were moved.

People in Israel are so friendly, and a surprising fact we have been discovering is that whenever they find out we are from Japan, they seem really happy and pleased with our presence. We are only here for a few days, but we are already overwhelmed. We are of course impressed with those ancient buildings and the dignified atmosphere of the city, but what we are touched by the most is the friendly and warm hearts of the people we meet here.