At the end of October, HEAVENESE went to Israel to take part in Japan Culture Week as they were invited by the Embassy of Japan. This event was the first ever of its kind under the auspices of the City of Jerusalem and Embassy of Japan in Israel.
This was HEAVENESE' first visit to a nation in the Middle East.
They performed at Tikotin Museum in Haifa, Japan Week in Jerusalem, Ankori High School and Ziv High School in Jerusalem, and the Promise School in East Jerusalem.
Each performance was a great success.
In the distant country of Israel, in the Middle East, HEAVENESE received great acclaim and closed the curtain of their first Israel tour in success. 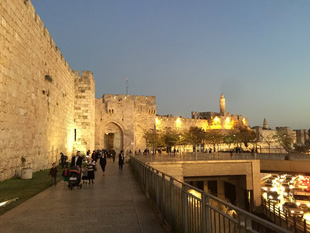 Israel has a history spanning over 3,000 years, however; the State of Israel was formed just after WWII.
The nation Israel was founded by diasporic Jews from all around the world, who returned to the region and established the country. Consequently, the Jews have been at odds with the Palestinians who were expelled from the region. HEAVENESE arrived in Israel right after an armistice was declared while Israel was warring with the Palestinians in the PNA (Palestinian National Authority) governed Gaza Strip. A month and a half after the cease fire agreement, HEAVENESE was informed by their contacts in Israel that it would be safe to travel there.  Under these circumstances HEAVENESE arrived in Israel.

Jerusalem, so rich in history, was so beautiful and peaceful as it did not show any signs of war since the conflict was a good distance away in the Gaza Strip. The City of Peace welcomed us.  The Dome of the Rock in the old part of the city glittered and gleamed in the sunset, lighting up the city walls as if they were an outdoor movie set or a theme park. 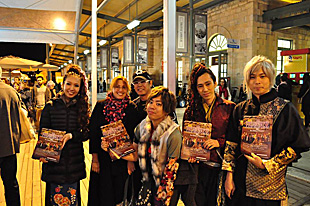 On this day, HEAVENESE was given the unexpected opportunity to perform at the welcoming reception for Japan Culture Week. This was HEAVENESE' first public performance in Israel. As this was a spur of the moment performance, some  band members were not there as they had not arrived in Israel yet.  The venue was The First Station in West Jerusalem. It is a historical site, the site of the old train station, which was refurbished and has become one of the most popular cultural and recreational areas in Jerusalem.  The First Station was the primary venue for the first ever Japan Culture Week in the City of Jerusalem. 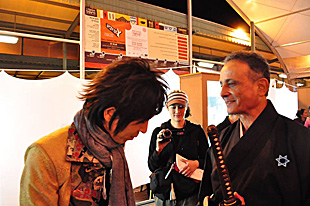 This welcoming reception was a private event, so the space was cordoned off with white curtains preventing the general public from entering.  Konishiki, a former professional sumo wrestler in Japan was also invited to this reception. Just around the time when Marre and Kumiko arrived at the venue, Konishiki was doing a sound check. Why was he there since he is Hawaiian?  It must be because he is a former high-ranking sumo wrestler.

The reception had a buffet serving Japanese sake and a sushi which were in accordance with Jewish dietary regulations. A dignitary from the Japanese Ministry of Foreign Affairs made a speech followed by the mayor of Jerusalem. The master of ceremonies was the former ambassador to Japan, Eli-Eliyahu Cohen. 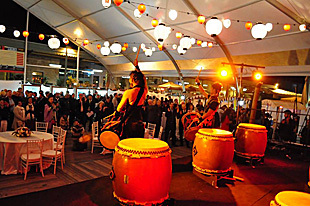 HEAVENESE did a short taiko (Japanese drums) performance at the request of the event's organizers.  Their shakuhachi (bamboo flute) player played some Israeli folk music with a Japanese flavor followed by a taiko solo. Since their main taiko player, Makoto could not join this tour, their drummer Ikki filled in and played along with their other primary taiko player, Lue.  All the band members took part in playing HEAVENESE' signature taiko song, 3N1, while accompanying it with shouts of "Yerusharaim (Jerusalem)" to fit the setting. 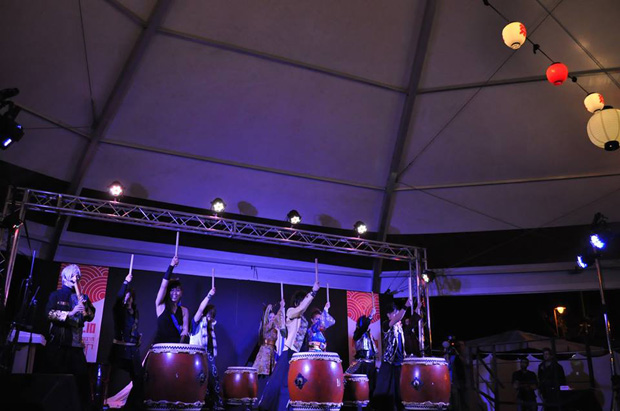 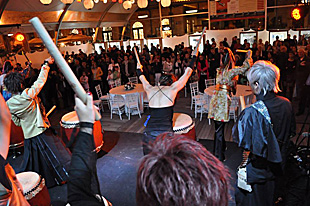 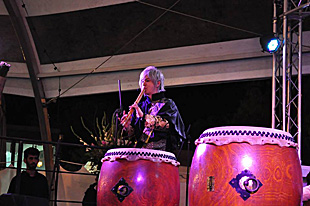 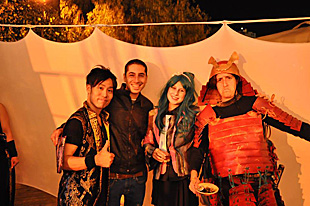 Many people who were outside the reception area were craning their necks to see the show including a small child on his father's shoulders. All the band members were moved by the great number of people surrounding the reception venue.

After the short performance, Marre was surrounded and interviewed by the local media. The organizer of the reception suddenly asked HEAVENESE to play again. This was totally out of the blue. HEAVENESE is not a taiko group so there were no other taiko songs that they can play. In addition, they were not prepared to play any of their other songs.  What song would they play??   They were wondering what they should do.

HEAVENESE noticed that the number of guests was increasing in comparison to the beginning of the reception, so there must have been some people who missed their first performance. They decided to play the same taiko set again. 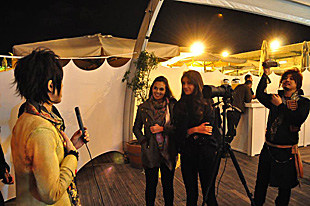 After the quick second performance, just as before, Marre was interviewed by the media, and the rest of the reception continued in a solemn manner.  This was just a reception, but a great number of people excitedly engaged HEAVENESE' band members afterwards. The people were told that this was just a snipet of what HEAVENESE does and were invited to come to the upcoming concert.  After conversing with the guests in this manner, all of HEAVENSE' band members were filled with not only great expectations about what was to come, but also anxiety as to whether people would really come to the concert or not.  This ended HEAVENESE' first performance on their Israel tour.