A Huge Sensation: Day One in Jerusalem 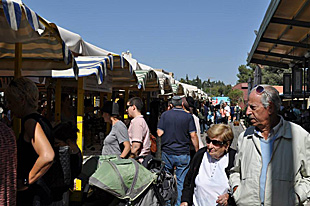 Being the headlining band for Japan Week, which had been going on since the 20th of October, our first performance was scheduled for one o'clock in the afternoon, a few hours before Shabatt (the Jewish day of rest, the Sabbath) was to start.
It was a pleasant day, dry and with a clear blue sky. Although it was a bit warm, we felt a refreshing breeze in the shade as if in the mountains.

Japan Week was held at The First Station, and it was quite busy. Restaurants were open, booths were selling all sorts of things and workshops concerning Japan were being held inside the building. It was a completely different site from the welcoming party with the dividing screens removed.

From around 12:30, we began our sound check. Even though we were still getting ready, people there started taking pictures. Marre said, "Our performance starts at 1:00. See you then" and got down off the stage. Yet even for that, people cheered. Even though it was the first time for people to see us, a sense of expectation already filled the venue, which evoked an unfamiliar feeling in us. This sense of expectation from the crowd gave us the feeling that "this concert would be be a resounding success". 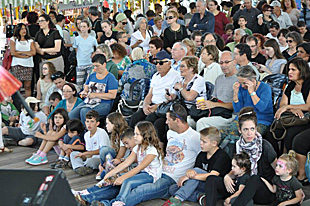 Within fifteen minutes or so after the sound check, all the seats were filled. In the security zone right in front of the stage, there were some people sitting on the ground, and we also saw some children. The audience was eagerly waiting for us with great looks of anticipation on their faces as if we were super stars.
A little after one o'clock, our first performance in Jerusalem finally kicked off.

Our performance started off with the chant "Ra-se-ra" and the Yosakoi style dance to the Japanese folk music "Ohayashi", which is genuine Japanese folk music. The audience ate it up as if to say, "This was just what I wanted to see".
Our opening song for Israel was "You Are Good". 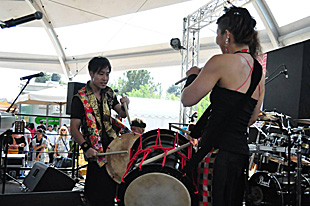 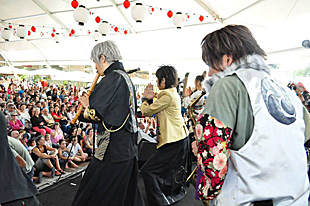 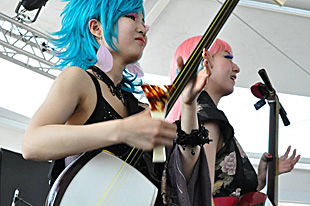 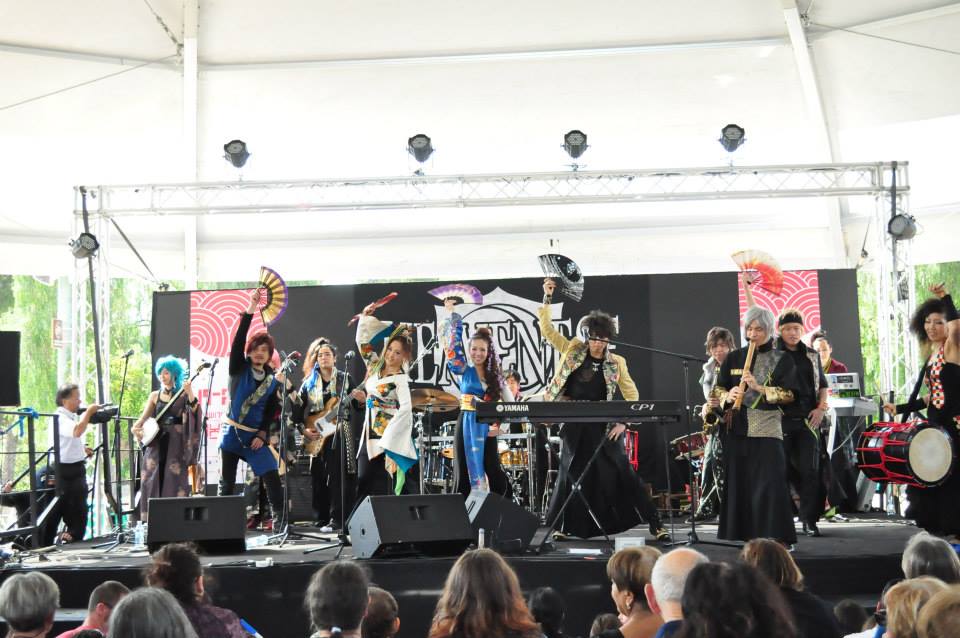 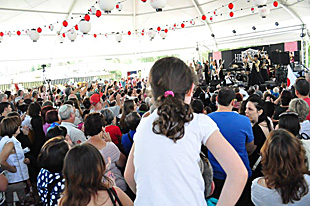 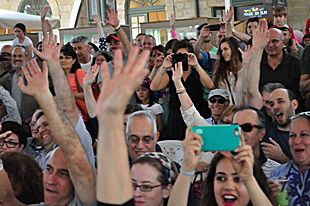 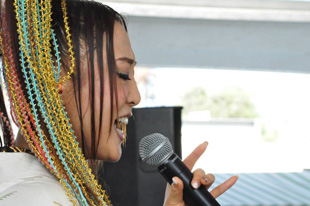 As "You Are Good" was fading out, "Hava Nagila" slowly began being played on the piano. We saw smiling faces in the audience. Proceeding into "Hevenu Shalom", our band members and the audience sang this Israeli folk song together. We were unified from the very start.

Although there were only children for our performances at the schools, on this day there were men and women of all ages gathered together. In spite of the age range, Marre's shout of, "Doe-yo" (How's it going?) and the crowd's response of "Ee-yo"(Good) really enlivened the atmosphere, and it was repeated numerous times.

At the midpoint of the concert came the highlight of our time in Jerusalem.
"Mima’makim" is a hit song in Israel and was written by the famous Israeli musician, Idan Raichel. Right before our departure for Israel, we had been rehearsing "Mima’makim" for this performance.

This ethnic music song, which is sung in Ethopian and Hebrew, was reborn and became a Japanese folk song.
The catchy vocal melody resounded throughout the venue, accompanied by loud cheers and applause which greatly moved our band members on the stage. The second half of the chrous of this song was sung by everyone in attendance.

We were completely unified with the audience.
After our performance was finished, the cheers and applause that filled the venue were even louder and continued relentlessly. Marre said, "We have had many performances, but this overwhelming feeling is something I have never felt before". 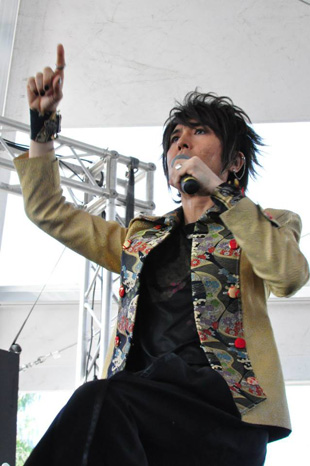 On this day, Marre briefly shared his insights with the audience that filled the venue.
He thanked them for what Israeli soldiers had done in Japan to help with the recovery after the March 11th catastrophe, as he had done the day before at a performance at a school. People responded enthusiastically.
He shared about the importance of harmony according to the Japanese saying, "Regard concord as the greatest of virtues".

We were well aware of the ongoing conflict between the Israelis and the Palestinians and the fact that Israel had just made an armistice with the Palestinians concerning the Gaza Strip. Politically speaking they are in a quagmire regarding their territorial issues. Nevertheless, Marre still implored the people to pursue harmony.

He ended his talk with this to encourage them, "Through living in a melting pot of races you are a good example of how to accept people who are different." The audience, with some in tears, gave a relentless round of applause.

Israeli's recent use of military force in the Gaza Strip was harshly criticized by the world. They knew that the world didn't think highly of them.
The general public in Israeli have been deeply hurt by the public denunciations of other counties and the world's tendency towards widespread antisemitism. It seems that these words that were shared by us who came from an eastern country became a great encouragement to them.

The time had finally come, and Marre, the leader of HEAVENESE, was filled with deep emotion when he sang the song "Silk Road" in the land of Jerusalem.
This is a song about the dramatic historical account that ancient Israelites, after the fall of Jerusalem around 70 A.D., traveled to the East in pursuit of freedom and eventually arrived in Japan. 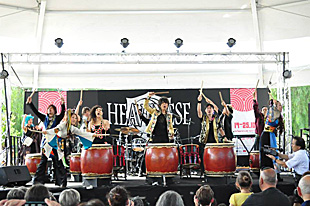 Jerusalem in Japanese is "Heiankyo" which translates "City of Peace".
The city "Heiankyo" was established in Japan by the Hata tribe (it is generally believed that this ancient tribe was made up of Chinese or Korean immigrants) and Wakekiyomaro.
There exists only two cities whose names share the meaning "city of peace", "Jerusalem" and "Heiankyo".
What connects these two cites is the Silk Road.

This is not a "far fetched theory". Marre has conducted in-depth research on the Hata tribe. His study shows that there is a strong possibility that the Hata were Semites who belonged to the ancient area of Israel.

For Marre, performing "Silk Road" in Jerusalem had great significance for him.
With referring to the Israeli history of the diaspora and the possibility of their arrival in Japan, Marre sang this song with all his might. Even before he finished the song, the people in a unified spirit clapped for an encore. The dramatic effect of "Silk Road" made it the perfect song to usher in the end of the concert. The audience in their minds might have followed the footsteps that their ancestors had taken, being banished and heading out on their journey to seek freedom.

Our ending number, as usual, was "LIFT", and the encore was 3N1. We shared the miraculous story of the taikos from Haifa which greatly moved the people. 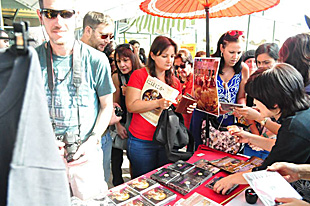 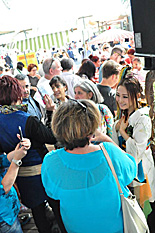 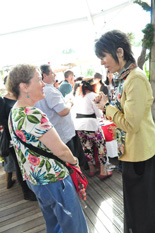 All the songs were done, yet there were sustained cheers and applause for another encore from the audience. Around the stage, a great number of people surged in to take pictures with us just as genuinely as the children at the schools did.

Moving through the crowd, Marre managed to come near a booth at the left side of the stage and was told by a lady in her 50s with tears in her eyes, "If everyone thinks like you, there will be peace in the world".

"For a while I was left speechless since I was strongly moved by the weight of her words and her tears.
Through our music and message, I was overwhelmed by the fact that we had offered something that touched her soul. In Israel, peace goes beyond the individual level as the nation itself cries for peace. They have gone through the Holocaust, the fate of their nation's existence, daily living in danger of terrorist attacks, so the term "peace" carries great weight in this country; it is not something spoken of lightly.
I was ashamed of myself (who am I to speak of peace) when I heard from this lady who lives in a very complicated country speaking "If everyone thinks like you, there will be peace in the world."

However, at the same time, the message shared in our concerts was effective in a country like Israel which finds itself in difficult circumstances.
The message of the Japanese spirit which values peace and harmony combined with HEAVENESE' performance has created a spirit of music through which souls are deeply touched and hearts are moved.
I am deeply convinced that in the depth of my soul, at this moment everything came together.